Electrons in nanostructures are in quantum states and interact very differently with photons, compared with electrons in larger structures. It is for instance possible to design single-photon sources using nanostructures which is virtually impossible in large devices. In these small structures the dipole interaction does not apply very well. We study how we can use them to enhance device properties as well as to understand the electron-photon interaction. 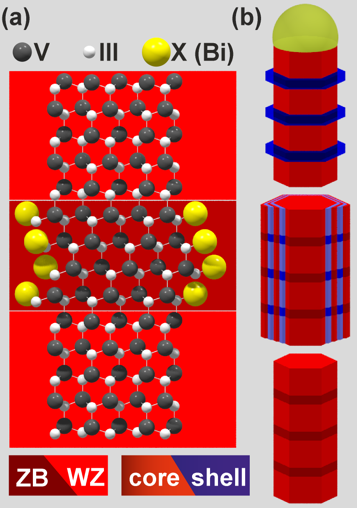 It has recently become possible to design nanostructures with atomically flat interfaces over large areas and it is also possible to design nanowires with diameters down to less than ten nanometers. The nanowires can also be overgrown which allows the fabrication of quantum dots, laterally confined quantum wells and quantum rings. We investigate the properties of these quantized structures using both optical and electrical means with an eye towards future devices as well as completely new phenomena such as novel phases of the electron gas. The figure illustrates different possibilities, and the different colours signify different materials or atoms.

Nanowire devices may have certain advantages for optical detectors. We investigate such devices in order to see how well they function as detectors. This is a complex area with many aspects to investigate, such as surface recombination, photon incoupling, current extraction and so on. The investigations covers devices operating from infrared to visible.